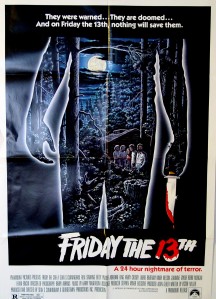 Long Story Short:
A group of teenager try re-open camp, that has once been closed due to a tragic incident involving the drowning of a young boy. But someone is trying to stop them, willing to kill as many of them as needed.

Review:
On May 9th 1980 a new movie genre hit the market: The Teen Slasher Movie. Through its unique camera work and the intense soundtrack, it gave plenty of young adult sleepless nights back in the day. Director Sean S. Cunningham used a lot of POV (Point-of-View) shots to intensify the feeling of getting hunted. Even though the movie comes off a little trashy, and has some of the worst acting performances ever, and on top of that a thin storyline, it has defined the horror genre, and was referenced and copied in many other movies, such as Scream. It also has a nice little twist at the end. And I just noticed how many sequels it has; I think I was counting 10, including the remake from 2009. If you don’t watch it for the thrills, watch it to find out how it all started, and laugh at the trashy performances. Friday the 13th is definitely a fun movie that takes you back in time.