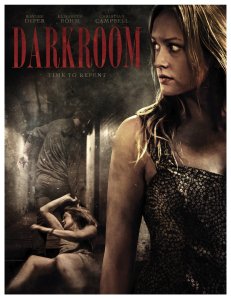 Long Story Short:
Fresh out of rehab, Michelle gets offered a modeling job in an abandoned mansion by her counselor, who happens to know the photographer. But instead of a professional photo shoot she finds herself in her personal hell.

Review:
What can one expect from a a movie that isn’t even 80 minutes long if we don’t count the end credits? Obviously not too much.
While Darkroom tries to build up as much back story as possible about the protagonist, it fails by delivering a meaningful storyline, believable characters, interesting dialogues, and a decent ending. There is an explanation why poor Michelle is going through all this terror, but that information is just sloppily placed in the movie, and it is a little questionable, at least the way it is presented. The major issue with this movie is probably the lack of interest one develops for the protagonist Michelle, I couldn’t care less about her or anyone else in this movie. Acting wise I would say the job was delivered as well as possible, given the fact that the script was pretty bad. The transformation of the basic idea, however, could have been very intriguing, had the budget been used for something other than gore and makeup. And since we are talking about a low budget production, those effects aren’t that great either.
The quality of the movie isn’t bad, and the actors could have given a great performance. But, as always, everything starts with the script, and that was flat and uncreative. If I were you, I would pass!