I just heard about a movie called Vicky Cristina Barcelonan (2008) starring Scarlett Johansson and Penélope Cruz, which tells the story of two girlfriends, a painter, and his ex-wife, whose about to re- enter his life. Given the fact that it is PG-13 I do not expect too much sex but I am excited to check it out. If anyone has seen it, let me know.

Carla and Bruno are deeply in love, but when Rai enters their very idyllic life things are turned upside down. They are equally enchanted by his charm and free spirit, but by their attraction to Rai takes their own relationship on the verge of breaking apart.

Great story, not too many twists, but still intriguing. The actors are very attractive and portray their characters amazingly well. The landscape is dreamy and inviting, and the camera work is great as well. A must-see in my opinion.

An American student gets involved with two siblings in France during the revolution in 1968. While the outside world is practically at war and strikes are ruling the streets of France, the three are lost in a world of poetry, sex and sensuality.

Stuart lusts for Alex (a girl), Alex has feelings for Eddy, but Eddy has the hots for Stuart. How are they going to solve this dilemma? 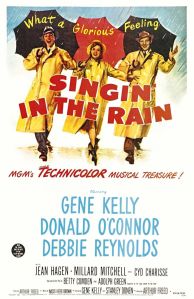 Yes, you have read correctly. The movie about a silent film production company transitioning to sound gives off a threesome vibe in my opinion. Don and Cosmo have been inseparable ever since they met for the first time. Even when Don becomes the star of a silent film company Cosmo is by his side, providing music themes. When Kathy enters their lives, she is supposed to be dating Don, but a scene where the three come up with an idea for a musical idea and sing the song “Good Morning”, I felt a tension between all three of them, I don’t care what anybody says! 😀

You can watch the scene here, unfortunately the part where Cosmo looks deeply in Don’s eyes isn’t on here.
P.S.: A detailed look of Singin’ in The Rain will follow shortly 🙂

A high school counselor gets accused of rape by two students that couldn’t even be more different: Spoiled little rich girl Kelly Van Ryan, and Suzie Toller, who lives in a trailer. But even though it seems like the two girls have nothing in common with each other, an investigating police officer smells a conspiracy.

Okay, I admit, the sex scenes seem like the uncreative fantasies of a thirteen year old, who just doesn’t know any better, but for some reason I like this movie a lot. Thinking about it, I was actually thirteen when I went to see this movie, which is too funny. 😀 What I enjoyed about Wild Things is that it was sexy, stylish and had many twists. I am still wondering how Neve Campbell got out of taking her shirt off. Denise Richards, who isn’t even mentioned on the posters shows everything, while Neve always wears a tank top. Anyways, if you decide to watch this movie, don’t watch the trailer, because as usual it gives away everything.