Red vs. Blue (2003- ) – A webseries mainly for Halo fans and gamers but also (possibly) for people who don’t get it 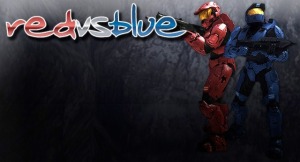 The Story:
Red vs. Blue is a fan made webs series that tells the story of characters in the video game Halo. They wonder where they come from or why they do what they do, but at the end of the day they just go with it. So they spending the day taking orders and talk about everything.

Review:
My video game days have been over for a while, the last games I played were Warcraft II and Simon The Sorcerer II, so I don’t really get the hype about online games. I would assume that besides winning, the main idea is to communicate with other people, and that’s what the characters do here. The series itself – with an average length of about 5 minutes per episode – is kept very simple and reconstructed the HALO graphics very well as far as I an tell. The main characters have different personalities that are equally funny, it is not lacking in pace, and the jokes or dialogues sometimes remind of skits from Saturday Night Live or Reno 911!, it feels like they improvise a lot, which is not a bad thing. They even give the impression of them communicating through radio headsets which gives a real feel to it. Sometimes it’s funny, and many times I don’t get, but I am sure for people who live for this “world” it is hilarious. As far as I can tell it has a huge fan community and is on its tenth season. You should give it a try, it is available for free on Amazon Instant watch and Youtube.

****This was a request from Sterling Archer. I tried to review it as objective as possible since this is something I normally wouldn’t chose to watch, but I hope this helps! Thanks for the request****