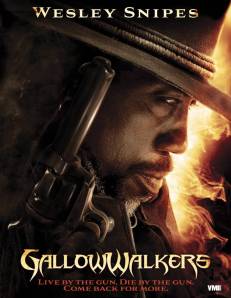 Long Story Short:
Gallowwalkers are people who die and come back from the dead. Set in the wild west, where people’s lives don’t mean anything, Aman, a mysterious cowboy- gunman is seeking revenge on five Gallowwalkers who have raped his girlfriend.

Review:
I found the first ten minutes quite entertaining because it really caught my attention when they talked about a portal between heaven and hell and nuns who guard this portal. But then the story just falls apart, we don’t really know what’s going on or why things happen the way they do – well, besides Aman’s revenge trip. And can we talk about those horrible wigs everyone was wearing?! I mean, I have a better looking synthetic wig at home than what they had to offer – don’t ask. They seemed to have used all the budget for the few gore effects that were really nicely done, but besides that the movie doesn’t have anything to offer. It’s already bad that the story didn’t make sense but what’s worse is that I really didn’t care if it did. I was just glad when the movie was over. This is another proof that many directors shouldn’t be writers. It seemed well directed but the script was horrible. Gallowwalkers has apparently been finished a few years ago before Mr. Snipes even went to jail, but I guess they wanted to wait until he gets released, but they should have let it collect dust until the end of time if you ask me. My advice: If you watch the trailer you have basically seen the whole movie and saved 90 minutes of your life. Poor Wesley Snipes, but at least he has the opportunity to be part of the Expendables‘ Franchise, maybe this will give him the well-deserved comeback. I wish him well!