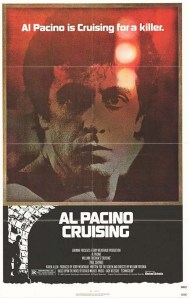 Long Story Short:
A police officer goes undercover in the gay S&M and leather scene to find a serial killer. During his investigation he feels oddly attracted to this world, and risks losing his own identity.

Review:
Crusing, which is directed by William Friedkin (known for The Exorcist (1973) and The French Connection (1971)) comes off very dark, and the killer with a voice that seems to come straight from hell, is very creepy. The killings are intense and seem very real, and I am sure that the reason for so many gays going against that movie at that time was, they were actually scared of it. After all, hate crimes weren’t acknowledged by the law, and homophobia was widely common, so the movie was more of a reminder that these crimes exist. The “controversial” scenes shot in the leather bars in the gay district of New York made me laugh a little because they did seem very stereotypical, and I think by now we have seen the same or even worse images in gay parodies. But apparently in the unreleased uncut version there is a lot more to see. The cast is great, even James Remar, who plays the dead father in Dexter has a little part in it.
I think Al Pacino has so many faces, he can play almost everything, and is not afraid to play roles that people might not be fond of, and Cruising proves this. So is this his most controversial role? It is probaly one of them, but I think his role in Angels in America is far more controversial. Performance-wise I thought he was struggling just a little bit, and seemed awkward (especially a scene where he is dancing very stiff and strangely) but I gave him the benefit of the doubt and thought that this was his interpretation of his character. Who knows.

While watching the movie I had quite a few questions. These question include spoilers, so if you want to see them you may click here.

Anyways, Cruising is a very decent thriller, which has that 80’s flair to it, a creepy killer, and great leading and supporting actors, If you shy away from movies that deal with gay themes it might not be for you, but for everyone else open for an interesting, dark, and intense thriller, go for it, and Al Pacino’s fans won’t definitely regret it either.
But beware: the odd ending might leave you confused, and with a few question. Click here if you want to get a more detailed look at the movie and the questions I had while watching it. I even came up with a few answers! 😀