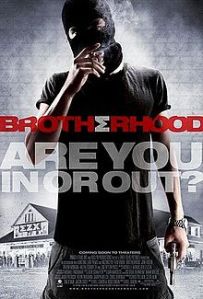 Long Story Short: What starts as a “harmless” hazing routine gets out of control, causing everyone involved in it to have the worst night of their live.

Review: This movie is only 78 minutes long, but each minute is nerve- wrecking and sometimes almost unbearable to watch. I probably went through all possible emotions while watching this low-budget indie piece: tension, shock, disgust, horror, bewilderment, and I was literally sitting at the edge of my seat, as a matter of fact I almost fell of the couch a few times, even had to get up a occasionally and walk around because certain scenes got me so mad.
Does that mean the actors did an terrific job for making me go through all these stages? I believe so! Were the circumstances shown in a realistic way? I want to say no, but unfortunately I believe that people might really act this reckless, crazy and careless, without wondering or worrying about any consequences. And what’s worse, I am sure many people get away with it, just because their parents have a lot of influence. I wasn’t born nor raised in the United States, and I know very little about hazing and how fraternities work, but this movie gives the impression that fraternities consists of rich, spoiled, racist, stupid wannabe- thug Caucasians.
The whole movie I thought there is gonna be another twist like the whole scenario is actually a prank, just because Jon Foster was acting kind of weird, and it came off as he was trying to hide something. Turns out he was just trying to hide the fact the he can’t act that well, I guess.
Brotherhood is not a milestone in movie history, it doesn’t have the most creative plot, and especially the racial sub plot seemed a little forced – yet still very upsetting, I know it p!$$eD me off – but it left a bitter effect on me, wondering how I would have reacted in such a horrible situation at this young age?