About Duck Dynasty, Bible Thumpers, and the Difference between Freedom Of Speech and Indiscriminate Attacks of Individuals 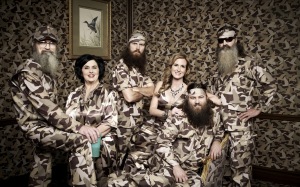 I have really tried to stay quiet about the issue regarding the Duck Dynasty father Phil Robertson and his offensive slurs about gays and blacks, because I don’t like being surrounded by hatred and ignorance. But I have to say something:

For those who don’t know about the issue, let me break it down to you in as little as possible:
Duck Dynasty is a reality show on A&E about a family living in the back swamps of Louisiana making a living with their duck- hunting business. Even though their business runs more than successfully, they don’t act stuck up or fancy, and stay true to themselves. With each season the ratings grew and always stayed above 8 million viewers each week.
But for the past couple of weeks – 9 days to be exact – a video has gone viral where the father of the family Phil Robertson basically said gays are scums (he also compared homosexuality to bestiality) and black have been enjoying segregation, or even wanted it – I spare you with the details.

While A&E claimed to be shocked about these statements, they decided to suspend Robertson from the show, but didn’t plan on cancelling their cash cow. The whole nation went crazy about this decision, not because they were outraged about Robertson’s offensiveness or A&E’s decision to keep the show on air, but about the decision to suspend one of the most significant characters on Duck Dynasty. On Twitter it was hash tagged as #FreePhilRobertson and many conservatives spoke on his behalf, claiming he was just living his life by the bible and in the name of the Lord. Surprisingly a lot of African-Americans were on his side as well, which made me question if the one’s backing him even followed the whole debate. On top of that, the entire cast threatened not to continue with the show any more since Robertson plays an important part of the family.

After only nine days A&E decided to give in and reverse his suspension, and announced they would air a national public service campaign “promoting unity, tolerance and acceptance among all people” on all its affiliated networks, which include the History Channel and Lifetime among others.

I am wondering in what kind of a double standard world we live in where networks continue airing a show with a cast that has made clear they are ignorant and racist, but explaining that the network is actually very liberal and tolerant; where stores continue selling merchandise of an obviously racist brand, and think by keeping quiet about the whole incident things will magically work out. Did people lose their dignity, and prioritize profit over
equity?

I know I shouldn’t be surprised about it, especially living in a world that is hungrier than ever when it comes to money, but I always believe in the good spirit of people and hope that they make the right decisions.

What I don’t understand is calling this Freedom of Speech. I am all for it, I am performing it right now, I express my own personal opinion, but where is the line between Freedom of Speech and plain offense and bullying? If someone says he can’t understand homosexuals because they can’t imagine having sex with the same sex, I get that. It’s like me saying, “I don’t understand how people don’t like mayonnaise or milk,” because I love mayo on my sandwich and milk on my cereal. However, I still accept that fact that people don’t feel the same way I feel. And when it comes to verbally degrading someone, calling them perverts, abnormal, or claiming they have been happy being enslaved, I think it crosses the line.

And usually we get the same justification for these slurs: “I live my life by the word of the Lord”.
How is living your life by the bible justifying the fact that you think black people were gladly living in segregation? What part of the bible exactly says that?

I am sorry that I have to go there, but I wonder if people even know what the bible is about? It’s a book based on a true story, which has been written down by human beings … NOT BY GOD … hundreds of years after the described events have taken place.
So, if something happened to me, and I tell my mother, and she tells my sister, while my sisters tells my aunt, and so on and so on, things and facts will change, a horse might become a unicorn and a very rainy day might become a flood. People add their own twist to it.

And That’s the reason why when reading any religious book one has to read between the lines. The book of Thomas, which was discovered hundreds of years after the bible has been published, is supposed to be the book that is most reliable, since Thomas himself wrote it while experiencing the facts he wrote down. I have read parts of it, and I have found no part telling me what’s right or wrong, besides the fact that we should love another. No one ever quotes that book or the new testament. What so called bible thumpers are focused on is the old testament which is filled with hatred and fear. And that’s how they live their lives.

When it comes to the bible, I could go on and on, but I probably save it for another Post. 😀
So, those are just a few facts to think about. And may I just add that I am Christian myself, so I know what I am talking about. I am a very spiritual person, but I guess, I have a different understanding.

My point is, if we don’t go against this foolishness it will always exist, hatred will always win, and the world will finally become the worst place to live on, because the things we have been fighting for the most will slowly die: Justice, Love, Tolerance and Acceptance, and Humanity. We have to fight harder to make this world a better place.

How can we do that?
Well, for starters if you have been an avid viewer of Duck Dynasty and share my opinion you should stop watching it, even if you liked it. The longing for peace should be more powerful than the urge to watch a show that practically promotes hate. Many people did the same thing with the movie Ender’s Game which has been praised for months, but after the author Orson Scott has been outed as a homophobe, who also expressed his disgust about the gay community in a very offensive way, people started boycotting the movie. I was looking forward to see it, but watching it would have gone against everything I believe in.

What are your thoughts on all of this? If you are disagreeing can you explain why, but in a respectful manner?

As you can see, I had to say a lot today, and while I was trying not to turn this into a political or religious debate, I really had to get that off my chest, and tried to express it as respectful as possible.

That’s all for today, folks.