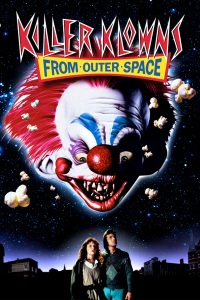 Long Story Short:
When a town is visited by odd looking clowns, people are amused at first, but soon they have to realize that the clowns came actually from outer space, having only one mission: kill.

Review:
I think I should make a Movie list with Clown- Horror Movies… *Note to myself*
Killer Klowns from Outer Space was another positive surprise from my Halloween movie night. The title actually says it all. I have never heard of it before, but my spouse told me how scared he was when he saw it as a child. Well, I checked out the facts on IMDB before we started watching it, so I figured that it was more of a comedy horror movie. I have to say, as a child I can imagine being scared, but for adults it is just a very fun movie to watch. It reminded me of Gremlins, because it tried to come off scary sometimes, however, it was really just hilarious. The clowns look amazing, I love the make up, the idea of aliens in clown form was just hysterical to me and I couldn’t get enough. They kept the humans in cotton candy, they shot at everyone with popcorn which formed into killing creatures. I had a blast, and I have spotted many familiar faces, that I’ve seen in bigger movies later on. If you want to see a movie with a hilarious concept that takes the clown theme to a whole new level, I am sure you can’t go wrong with Killer Klowns from Outer Space. It has its typical dorky 80’s charm, over the top characters, and flat dialogues, but it is definitely entertaining. I will watch it again.