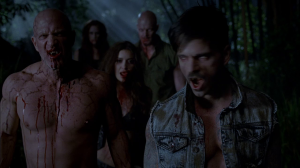 So WHAT HAPPENED WAS:
After killing everyone in vampire prison and drinking Warlow’s blood, all the vampires are out and enjoying the sun beams that so many haven’t seen for hundereds or even thousands of years. But this high doesn’t last too long; after Warlow gets violent with Sookie, Jason kills him, and with him the ability for the vampires to be in daylight fades away, too. When it wears off, Eric is taking a sunbath on top of an iceberg and burns to death, but he shows some Eric- Penis before he says goodbye. Jason is still the bitch of the vampire that claimed him in prison, but at least he is protected for life. 6 months later: Bill has written a book about his experience of being a “God”. Sam has become the mayor of Bon Temps and decides that in order for humans and vampires to live in piece, every human in Ben Temps needs to be somehow involved with a vampire, meaning letting them feed on them, in order to be protected of other dangers. As it turns out the new danger are vampires who got infected with the Hepatitis V Virus, which basically makes them Zombie Vampire. The End.

My Thoughts:
This episode had so much going on, I was totally blown away. I am still digesting all this information as I am writing right now. I am so glad that they weren’t dragging all this information for two more episodes, and just decided to have a banging finale episode that has everything: Action, Drama, Comedy. This season definitely made up for the very lame and disappointing season five. I actually thought that this could have been a good finale season for True Blood, but then the big reveal: ZOMBIE VAMPIRES!! I mean, what do they do? Are they stronger, faster, or have different powers? Can they be killed like other vampires? I don’t even know. I am very excited how the seventh season will turn out, and I dearly hope that they keep up the pace as much as they did this summer. The only thing I missed were Lafayette’s sparkling appearances, and I am looking forward to seeing more of him in 2014, or at least I am hoping for it.