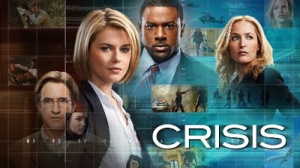 Long Story Short:
A school bus is being attacked and the students are kidnapped. Among the hostages are children of the most influential people in the world. Who is behind this crisis? Who is involved and who’s not?

Review:
Last year we have been introduced to TV-Show- concepts that could be easily told in form of a movie, but the writers and producers decided to take it to a more lucrative level and create a whole show. Examples are Hostages (CBS), The Black List (NBC) or The Following (FOX). Even though Hostages had a great lead with Toni Collette, it didn’t pick up as many viewers as expected, so it remained one season and a few episode are still left to be aired. But honestly, I rather have one great season than a second or third season which content seems forced and can’t keep up with the previous season. Unfortunately that’s what happened with The Following. While the first season was intriguing and could have easily stand on its own, the second one appears to be unneeded and boring.
NBC has come up with The Blacklist, another show with a simple concept, however there is a lot of room for different twists and turns, and I see a bright future for it.
In March NBC will be airing two more shows, Crisis and Believe.

I have recently watched the pilot of Crisis, and I can tell you it is going to be a blast. There is a strong cast: Gillian Anderson, known as Scully from The X-Files, Lance Gross and Dermot Mulroney, who appeared in plenty of successful movies and Rachael Taylor who could finally be part of a successful TV-show. Taylor’s last shows 666 Park Avenue and the reboot of Charlie’s Angels have been cancelled even though especially the mysterious 666 was plenty of fun.
But of course the focus should also be on the newcomers such as Stevie Lynn Jones, Adam Scott or Taylor Bright.
Like I already said, the storyline is good enough for a movie, but it also seems to work great for a whole show. After seeing all the twists the pilot had to offer I am excited to see what’s next.
If there are enough promos and ads to attract an audience, which can be anywhere from 14- 49 in my opinion, I see a bright future for Crisis. If you liked The Blacklist, you will love Crisis.