The Devil Wears Prada (2006) – Let’s get some Facts Straight 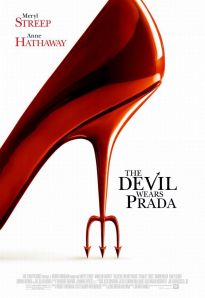 Long Story Short:
Andy Sachs’s biggest dream is to be a journalist. When she is given the opportunity to work as the assistant of the editor in chief for a renowned fashion magazine, she sees that as a way to set foot in the industry. However, the tough and shallow world of fashion is not welcoming her as friendly as expected.

Review:
I adored this movie ever since it came out. After watching the movie I have read the book and both were equally well done. I decided to write a review about The Devil wears Prada because a fellow blogger critiqued it very harshly by basically calling it a cliché movie, saying
“Oh look. It’s a movie about someone whose friends support her until she reaches her goals, at which point they abandon her until she gives up her goals for them.” Furthermore he wonders, “Why is this story used so often? Can’t a girl be successful and have support from her friends at the same time? Sheesh.”

Since I couldn’t let anyone belittle one my all time favorites, I wanted to point out a few things here:
The Devil wears Prada is a great adaptation of a brilliant book; the characters have depth and the actors have been wisely chosen. Having Meryl Streep as the evil, bitter and eccentric editor in chief of one of the most popular and successful fashion magazine in the world was the best choice. Maybe Glen Close would have been a good pick, too, but Mrs. Streep was just perfect. I always say it, and I will say it again, Meryl Streep would even be a great choice to play Batman.
Which leads me to my first point: If you love Meryl Streep you will love this movie, too.

It is not a typical story of a girl who gets abandoned by her friends because she becomes successful. Her friends distance themselves from her because she becomes too self-absorbed. She slowly falls in love with the fashion industry, starts dressing differently and sets her priorities in favor of her job, rather than her friends. On top of that her transformation also effects her character: she becomes superficial. So as a friend wouldn’t you react the same way? I know I would leave her alone, after trying to spend time with her without success.
Meryl Streep has a very complex character as well. Miranda is the chief executive of a very successful magazine which means she has to represent a strong leader, and we all know women have to work extra hard in leading positions. Every scandal or weakness could be fatal. This is why she pretends to be an unapproachable witch, everyone is scared of. But Andy soon finds out the truth about her.
So, if you like well developed plots and characters, you won’t be disappointed either.

From a fashion aspect it is probably the most inspirational movie from the past decade. Anne Hathaway is a beauty and her transformation scene is everything.
Anybody who is interested in fashion or the fashion industry is going to love and appreciate this movie as well.

And with that I rest my case! 😀

Sure, it is not an art house movie of extremely high value, but it has a very nice storyline and a wonderful cast. It is never cheesy or cliché. But I will say that: Due to the theme it is more on the feminine site, but I know many straight men who enjoyed it as well. So it is your choice to make.