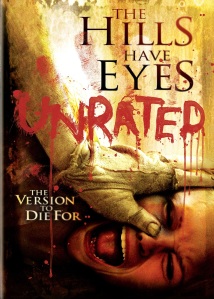 Long Story Short:
The Carters’ family trip turns into a nightmare when their car breaks down in an abandoned desert area, that is said to be former property of the U.S. Government to perform nuclear tests in the 1950s. What seems to be an accident turns out to be a setup, and the family has to fight for their lives.

Review:
This very successful remake of the movie from 1977 (directed by Wes Craven) comes like a smack in your face. The only time you can feel safe is during the beginning, but as soon as the story takes turns you won’t be able to sit still any more. I remember I watched this movie when it wore off my two sisters and I were basically the only people in the movie theater. We were terrified; one of my sisters kept whispering in my ear, “I will never let you pick out a movie ever again”, while the other one was busy digging her fingers in my arm. By the way my sisters are six and eight years older than me. It was not a surprise that this movie was disturbing coming from Alexandre Aja, the director who is also responsible Haute Tension (2003), a.k.a. High Tension, one of the bloodiest and most disturbing movies I have ever seen. There is also a rape scene in this movie, and I have to say that I detest movies that include graphic rape scenes, because they are usually so long that it almost seems like a glorification to me. But even though it is very gruesome, it is not dragged into details, we know what happens and that’s bad enough. The rape scene in part two on the other hand, which came out in 2007, contains a very brutal rape scene, j.f.y.i.
The Hills Have Eyes is an extremely creepy and brutal movie that I, again, wouldn’t recommend to watch alone. By the way, I was surprised by Dan Byrd, a.k.a Travis from Cougar Town, a.k.a. Brandon from Easy A. He is very chameleonic… yes that word exists, I looked it up 😀